“Bishop David Oyedepo, the President, Living Faith Church Worldwide also known as Winners’ Chapel, clocked 64 last month. He was born on September 27, 1954. As we all already know, he was not born a Bishop or Papa, as he’s fondly known and called today. He crawled, played on sand, ran around without clothes as most kids do.

However, he also did a few things differently as a little child, which form the crux of this piece dedicated to his 64th birthday. Let’s take a journey back to when he was still a small boy – yes, a small boy! 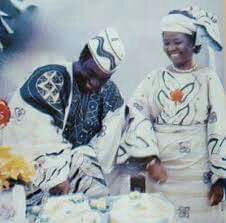 Heavenly Race: As far back as 1964 at age 10, young David Olaniyi Oyedepo, had started fantasizing about heaven (based on heaven-based stories he had heard), and he wanted to be there by all means. (No be today this man like heaven!) So, he made a child-like attempt to ‘relocate’ by running towards the horizon that always looks like heaven, touching the earth, until he (and his co-traveler kid friend) met an old man who sent them back.

Love For The Gospel: Between age 10 and 12, (1964 – 1966), he was already ‘practicing’ preaching using his grandmother’s living room as church and her soup cupboard as podium – and he had about 5 children as ‘congregation.’ That was even before he discovered the “Jackpot” of Matthew 6:33, a story for another day.

The Rod of Moses: At that same age, and based on biblical stories he had heard, he asked a carpenter to make a Moses-kind-of-rod for him – to ‘divide’ the Red Sea and take people to the Promised Land (And later in his life, God would hand him The Mandate, to liberate the world from all oppression of the devil…)

Tuberculosis Destroyed: In September that same year, having been a victim of tuberculosis, he woke up one night and discovered that his dormitory mates had moved away from his space because he coughed very badly. And he took a step of faith: went out and stood on a little rock behind the hostel; called on Jesus The Christ, saying, ‘Jesus, if it is true that you did all those miracles that I read about in the New Testament, do it again…” That was the end of TB…at age 15! His testimony: “He set me free from tuberculosis in 1969 and I’m free forever, for whatever the Lord does shall be forever”.

Dignity of Labour: At 16, he earned his first money, having learnt the virtues of the dignity of labour from his maternal grandmother, the late Mrs. Rachael Adeyiola Odetundun. Though he was comfortable, he just needed to learn how to earn – at 16! Well, he didn’t forget to ‘spoil’ himself a little with his hard-earned money: he bought himself a pair of “in vogue” shoes called ‘Apollo’.

Conference at 16: He attended his first Christian conference in March 1970 at age 16 – and he still remembers the theme till today: “God is not slow.”

The Miracle @ 16: In 1970, his younger brother had died of measles but he won’t take that. He made his mother put the ‘dead’ child on her back and led her to an uncompleted building where he laid the child down, prayed, called on Jesus, and the child jerked back to life.

The Assignment: When in 1973 he was asked to relieve a teacher who was due for maternity leave, he jumped at it. It was at a village in Kwara State. The first thing he noticed when he got there was no single church, not even the ubiquitous Catholic Church!

He went into action: First, he prayed, “Lord, let me never leave this village the same way I met it; Lord, put your name in this village.” And 40 days later, a church building was already in place. On his last day there, he got a prophetic gift (a lantern) from the elders of the village with these words: “Silver or gold we have not, but we give you this lamp. Let the light that you brought to our village shine round the world.” That light is still shinning, even brighter today!

Prayer, Like Food: From 1971, he was already a student leader organizing special prayer meetings in his school. “Prayer was indeed like food to me,” he wrote in THE MANDATE, one of his books.

The ‘Jackpot of Life’: In 1976, at age 22, he had an encounter with the Holy Spirit in Matthew 6:33 as revealed to him: “But seek ye first the kingdom of God… and all these things that others are dying to get shall be added onto you.” That revelation is still liberating many today – seeking ONE THING and gaining command over ALL OTHER THINGS!

THERE’S HOPE FOR BOTH THE YOUNG AND NOT-SO-YOUNG!

As we all rejoice with God’s servant, if you have gone past the aforementioned ages, no need to worry; you can start from where you are. God is all you need to have all your needs met. If you are still a teenager, don’t let that word “teenager” limit you; you can do all things through Christ. And no matter how old, if you are not born-again yet, take that step today.

You Can as Well Watch His Brief Story Here